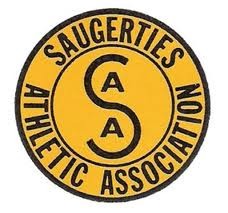 Rip Van Winkle Country Club, in Palenville was the site, this past Sunday, of the 24th annual SAA Golf Tournament sponsored by Sawyer Motors and Sawyer Chevy.  Enjoying fall weather, along with partly sunny conditions, 80 golfers teed off in a Captain and Crew Format.  Emerging from the pack to take first place honors was the team of Dean Myers, Scott Kozak, Jeff Shaller, Jr. and Jason Edwards with a score of 13-under score of 59.  In close second was the team of Lance Salmi, Brian Kotsel, Jeff Oles, and Ed Vanostrand at 60.  Three teams tied for third with a 10-under score of 60.  They included the teams of Eric Wilsey, Ryan Johnson, Gary Schoepflin, Eric Tavares; Bill Murphy, Chris Fabiano, Tim Baxter, Randy Nilsen; and Ray Tucker, Sal Misasi, Pete Kramer, Ron Coon.
Longest Drive honors went to Jim DiPerna in the Men’s Division and Sue Synder in the Ladies Division.  In the Senior Division, it was Bill Wootton with the longest drive.  Scott Helsmoortel was Closest to the Pin, nestling his ball just 30 inches from the cup.
Todd Felton was the winner of the 2016 Golf Membership at the Rip, which was donated by Sara and John Smith, proprietors of Rip Van Winkle CC.
The S.A.A. extends sincere thanks and appreciation to Bob Siracusano and George Sisco of Sawyer Motors and Larry Siracusano of Sawyer Chevy for their dedicated efforts in sponsoring the event again this year.  Additionally, to all the volunteers who worked the tournament and the many Hole Sponsors, who we kindly ask you patronize whenever possible.  Further, Sara and John Smith, along with Staff and Management of the Rip Van Winkle CC for going above and beyond in providing the venue, along with the many amenities.  Last, but certainly not least, the 80 golfers who participated in this year’s event.


COMMENTS
This article has No Comments.
Be the first to add your comments!
Click the "Post a New Comment" button below.
firstname lastname commented Just Now
×
"body"