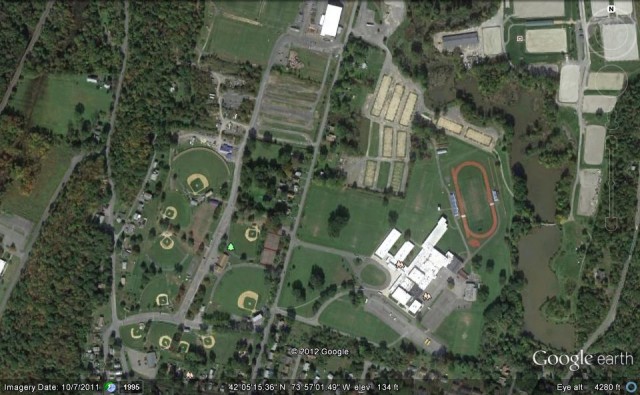 Thanks to Greg Chorvas for this write-up on Cantine Veterans Memorial Complex.

The Cantine Veterans Memorial Complex is a 127-acre sports and recreation complex owned and operated by the Town of Saugerties under the Department of Parks, Recreation & Buildings.

In the late eighteen-hundreds it was known as the Town Driving Park and owned by the Cantine Family, who allowed the use of their property for recreational purposes.

At that time their was a combination baseball and football field, one other field and a small amount of open space. In the 1930s, the W.P.A. (Works Progress Administration), a publicly funded program to put the unemployed to work, built an elevated grandstand for spectator seating. Restrooms, showers, and storage were accommodated below the seating area.

The combination baseball and football field was completely reversed and remains the same today as the Complex’s main baseball field (Cantine Field, # 11). Two additional fields were added. The project was completed late in 1937.

On May 8, 1938 Martin Cantine, besides contributing a sizeable amount of funding, donated the property, consisting of 31 acres to the Town of Saugerties. At that time it was renamed Cantine Field.

From that point on a pavilion was built, which still stands today as the Small Pavilion, Tennis Courts, a Basketball Court, and two additional fields, one of which was where the Frank D. Greco Memorial Senior Citizen Recreation Center is today.

In the early 1970s, the Knaust Estate donated 39 acres of land, immediately adjacent to the existing field, to the Town of Saugerties. Stipulations were for recreational purposes and the donation of the property was done in honor and memory of all Saugerties veterans of all military branches.

Shortly thereafter, in the mid 1970s through the dedicated and driving efforts of the late Jack Keeley a $99,000 grant was received through the Palisades Interstate Park Commission, under the Land, Water, and Conservation Fund. As part of this Grant, the Town was mandated to match the amount.

A very short time thereafter, in a unique and bizarre scenario, again through Mr. Keeley’s motivation, commitment, and relentless drive, the Town received another $99,000 through a combination of Federal and State Public Works Grants, and that money was allowed to be used as the Town’s match of the Palisades Grant. To the best of knowledge of many, including those familiar with grants, this was indeed very unique and truly a first.

As a result of these two grants six additional ball fields were constructed, including two lighted fields. An existing field was also lighted, as were the Tennis Courts. Additionally construction included the Large Pavilion with kitchenette, Senior Citizen’s Multi Use Recreation Center, playgrounds, basketball courts, horseshoe pits, roadways, parking, and indoor and outdoor shuffle board courts, along with many other recreational amenities.

Upon the completion and dedication of the project, the combined areas was renamed the Cantine Veterans Memorial Complex, in keeping with the wishes of the Knaust Estate and in preserving the memory and generosity of Martin Cantine and family.

As the 1980s progressed so did the evolving of the Cantine Veterans Complex through the combined efforts of volunteers, civic organizations, businesses, and the Town of Saugerties. The organizations that made use of the complex, such as the Little League, Babe Ruth teams, American Legion teams, Saugerties Athletic Association (S.A.A.) teams and others constructed dugouts, spectator bleachers, concession areas and press box buildings. Additionally, these groups purchased in full the professional infield mix, which is on all eleven ball fields. Further, the Kiwanis Club constructed a Bandstand. Many other improvements were added.

At the same time this was occurring Soccer was beginning to grow and since all the lands had been developed, eventually four ball fields were converted to Soccer fields each year in late August.

In 1990, with no room left for expansion, Vernon Benjamin’s administration began the process or purchasing 67 additional acres immediately to the north of the Complex. The purchase was completed near the end of 1991.

The following year a professional firm produced a long term master plan. Once again through the same combination of entities working together, development began to escalate, along with the escalation of volunteers, contributors, and Town commitments. Over $65,000 was raised for Small World Playground. Soccer fields were constructed one by one. Further, the U.S. Army Reserves constructed a large parking area for overflow and special events.

From that point on, to present, the Facility evolved into a state of the art fully enclosed Olympic size refrigerated skating rink. Over the past six years an attached structure was added, which accommodates seven locker rooms, restrooms, a full service concession, and Pro Shop. Additionally, skate rentals, elevated heated spectator seating, and public changing areas were added. Further, used components were replaced with new state of the art high-energy efficient equipment.

This accomplishment has been a unique and amazing story involving community support, spirited volunteerism working continually with the Parks Department, along with local and state government backing through funding, grants and incentives. Further donations and contributions by the Kiwanis Club, other organizations, businesses, and individuals since the beginning totals over $300,000. User fees revenues total over $750,000.

Today, as these revenue avenues increase, the Facility continues to evolve with improvements in the services provided and the many amenities associated with an Ice Arena. This is all carefully planned and carried out dictated by those revenues.