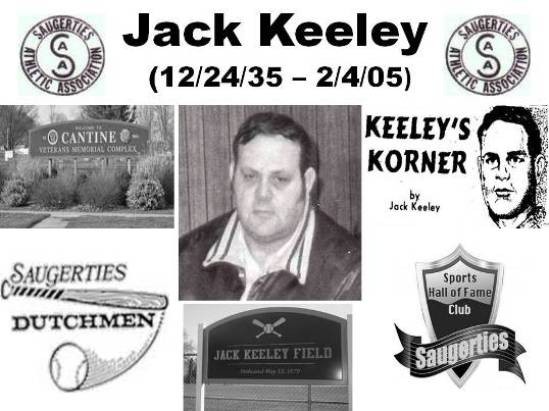 Anyone who has ever been associated with or participated in Saugerties sports and in particular the Saugerties Athletic Association has been influenced in some way by the late Jack Keeley.

Sadly, on Friday February 4, 2005, this Saugerties Sports Icon passed away at 69 years of age.

Jack who had a passion and was an avid follower for all Saugerties Sports was influential in helping to promote and shape the local sports scene since the late 1960s.

In the mid 1970s through his dedicated efforts a $99,000 grant was received through the Palisades Interstate Park Commission under the Land, water and Conservation Fund. As part of this Grant, the town was mandated to match this amount.

Again through Mr. Keeley’s motivation, commitment and relentless drive, in a unique and bizarre scenario the town received another $99,000 through a combination of Federal and State Public Works Grants which allowed that money to be used as the town’s match to the Palisades Grant.

As a result of these two grants, six additional ball fields were constructed, including two lighted fields. An existing field was also lighted, as were the Tennis Courts. Additionally construction included the Large Pavilion with kitchenette, the Senior Citizen’s Multi Use Recreation Center, playgrounds, basketball courts, horseshoe pits, roadways, parking, indoor and outdoor shuffle board courts, along with many other recreational amenities.

To look at what he helped to accomplish, one only has to wander through the beautiful Cantine Veterans Field Sports Complex. You’ll find an array of well maintained fields which are used by athletes and organizations of all ages on a daily basis.

On May 12, 1979, the original softball field (located near the tennis courts) was dedicated the “Jack Keeley Field” which proudly honors his name continues to be used today by the SAA Men’s Softball League and other local Hudson Valley organizations.

For the next 20 years, Jack along with Roy and Greg Helsmoortel were a driving force in helping to successfully revive the Saugerties Dutchmen in  1980. The Dutchmen were an adult amateur baseball team that was based in Saugerties.

His constant promotion and updated statistics drew interest and helped to create crowds that averaged over 2000 spectators per game at Cantine Field.

Jack was named the first ever Daily Freeman “Sportsperson of the Year” in 1983.

In 2006, the Saugerties Sports Hall of Fame Club introduced the ‘Jack Keeley Memorial Scholarship” which was a second Scholarship given to a Saugerties High School Senior involved in athletics.

As a sports enthusiast, his stories and his ever popular weekly column “Keeleys Korner” was a must read for many years in the Saugerties Post Star.

His hard work, dedication and unselfish commitment to sports brought pride to the Saugerties community and continues to help benefit local athletes today and for future generations.

The Saugerties Athletic Association is proud to have been associated with this Saugerties Sports Legend who through his vision helped to make Saugerties one of the best little sports towns around.