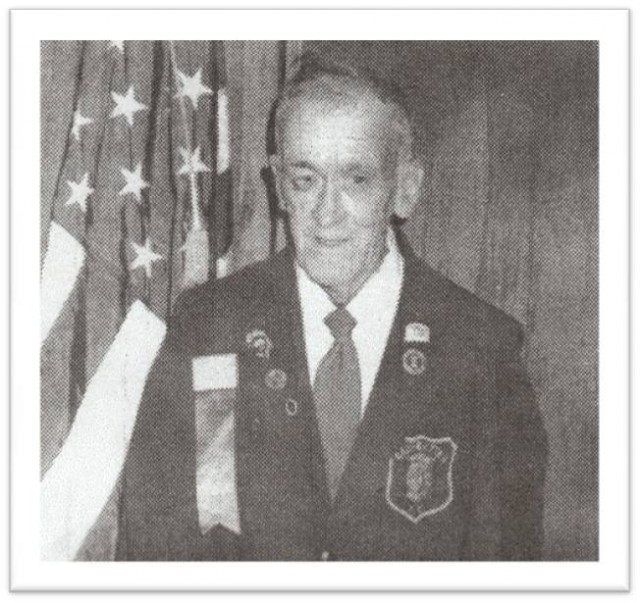 Robert J. (Bobby) Dixon had the run of Saugerties for most of his 82 years. Everyone in Sawyertown felt a kinship and responsibility to him. Bobby sadly passed away in 2001. The S.A.A. and Jim Gage fondly remember this Saugerties icon.

Robert J. Dixon had the run of Saugerties for most of his 82 years. (He was born in Saugerties on October 21, 1918). Everyone in Sawyertown felt a kinship and responsibility to him. He was born retarded, but he fooled everyone with his ability to get along, and it was Saugerties that kept him alive. For most of his life, he would leave his McDonald Street house early in the morning to head “upstreet.”  More recently, as his health failed, he would wait on his porch for someone to pick him up and drive him to the Main Street Food Shop. From there, he would wait for help to the Uptown Fire House, then to the American Legion Home when it opened at 2 p.m.  When he got tired, he would have someone drive him back to his home where he lived alone.  That all changed on October 14, 2000 when he suffered a stroke and was hospitalized.  He was moved to a rehab facility on November 9, 2000 and finished his life in a nursing home.

For most of Bobby Dixon’s years on this earth, Saugertiesians have been digging into their pockets, first for nickels and dimes, then for dollars.  As the dollars accumulated, he would give them to the American Legion bartender who would turn them over to his friend, Margaret Pierce, who would buy him clothes and a few luxuries, such as his precious “beeper.”

Much of what Bobby Dixon did, he did in his imagination. He often made notes, including his yearly letters to Santa Claus, even though every note looked like “mmmm,” and his signature looked like “DD.”

Many years ago when he smoked, he would stand on “Delson’s Corner” and “grub” cigarettes or butts from passersby.  To those with a lit cigarette, he would merely ask, “next.” However when he was asked for seconds, he replied, “Just got it.”

Anyone who coughed or sneezed in his presence, was quickly asked, “Got a cold?” which was followed by “where did you get it?” or “who gave it to you?”

If one named a person, they were told to “give it back to him/her.”  Many would answer “Newberry’s” to which Bobby would inquire, “How much?”

He loved to sing, particularly at the American Legion Home and in church (he regularly attended Saturday evening mass at St. Mary of the Snow Roman Catholic Church).  His favorite song was the Marine Corps Hymn. And while he knew some of the words, he improvised the others. In church, his favorite lines were “Hallelujah, hallelujah, Hallelujah.”

If Bobby Dixon got angry, the cuss word would fly. Some people got him angry on purpose. That’s when his fist would go to his mouth and the cuss words came out. Invariably, a few minutes later he would apologize to his adversary. He was an “honorary” member of several organizations.  A self-proclaimed “five-year trustee” of the Saugerties VFW Post, deputy fire chief of the Saugerties Fire Dept, “coach of several baseball teams over the years, most recently the Dutchmen and Legion teams, and, for decades he “played” varsity basketball at SHS.

Bobby Dixon coined many phrases that we regularly use, such as “going teddy” for going home to bed and his nicknames became commonplace in our vocabulary. He changed Greg Chorvas’ name to “Travis,” and there were so many others. Mike Schovel was greeted with “Monticello,” Charles “Topsy” Polcastro was “Potsy,” Marilyn Daley was “Sissy,” Boggy Beers was “Six-Six,” and an elderly lady he truly liked was “The Old Crab.”  Another old time who frequented the Main Street Restaurant was “The Old Goat.”

Because of his condition, most people feel that he would have been placed in an institution had he not lived in Saugerties. When his sister died, I was asked to give him the sad news.  We went for a ride. I pulled off the road and said, “I’ve got something to tell you.” “My sister died, didn’t she?” he answered. When told that she had, he cried and said “They’re going to put me away.”  I assured him this would not happen. Saugerties would not allow it.

Bobby Dixon probably had more friends than anyone who ever lived in Saugerties. That wide circle encompassed folks of every background, from banker to lawyer, to politician, to the average person on the street.  Everyone loved Bobby.  As Andrea Barrist stern wrote in the Woodstock Times in the December 26, 1985 issue about Bobby, “Saugerties is a town with a heart 365 days a year.”

It’s true that Saugerties did open its heart to Bobby Dixon.  Two examples quickly come to mind. A few years ago he was named Parade Marshall for the always gala July Forth celebration in Sawyertown. And in 1990, the Hall of Fame Club presented Bobby with a special recognition plaque “for all he has meant to Saugerties sports for decades.” Yes, Saugerties gave much to Bobby Dixon. But we received so much more than we gave.

In his own mind, Bobby Dixon was immortal.  When asked about his funeral, he proclaimed “I’m not going.” Well, on April 6, 2001, the Grim reaper decreed otherwise and Bobby has gone. We all know where.  Now Heaven is enriched by his presence, just as we have been enriched for having Bobby in our midst. And, while we will miss the ”hat-tipping” and other unique mannerisms.
Saugerties most unforgettable character will always be remembered.